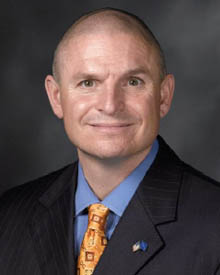 The Academic Dean and Provost at the U. S. Naval Academy, Dr. Andy Phillips, PhD will be visiting from Annapolis and will be our honored guest at our October Luncheon...

Hello everyone, just a reminder of our luncheon on Thursday, 10 October 2019... Sign up and Welcome Dean Phillips to North Texas!

As part of our ongoing series to bring exceptional speakers for our monthly Chapter Luncheons, we will have the honor of having the Academic Dean and Provost at the U.S. Naval Academy, Dr. Andy Phillips PhD.

Dean Phillips has been the chief academic officer for NAVY since 2009  and has been a dedicated steward of all facets of the Naval Academy academic programs. Please join us as we break bread and listen in on a vibrant discussion on the on his role in preparing our young men and women for their roles as future Officers in the Navy and Marine Corps.

Dr. Andrew Phillips is the Academic Dean and Provost at the U.S. Naval Academy. He became the chief academic officer in 2009 after having served as Associate Vice Chancellor for Academic Affairs and Dean of Graduate Studies at the University of Wisconsin.

Dr. Phillips began his academic career as a civilian faculty member in the Computer Science department at the U.S. Naval Academy in 1988. He has been a program evaluator for ABET since 1997, and was a member of its Computing Accreditation Commission from 2004-2009. He is also the current President of the Computer Science Accreditation Board (CSAB), and a Team Chair/Program Evaluator for the Middle States Commission on Higher Education.

***Please note this month's luncheon will be held in Maggiano's at Northpark Ctr and not our usual location at the Park City Club in Dallas.***