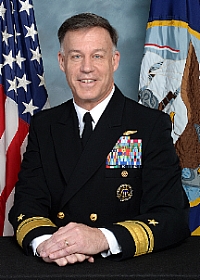 VADM Sean Buck, USNA '83, will be our guest of honor at our chapter's flagship event

We will hold our annual Blue Chip Dinner on Wednesday, December 22, 2021. Once again we will host the dinner at the Royal Oaks Country Club in Dallas.

The Blue Chip Dinner is intended to show highly qualified or "blue chip" candidates - and their parents - just how special the Naval Academy is. Many local alumni were themselves once blue chip candidates. It is our showcase event for the year.

We are excited to host our flagship event in our traditional format.  Reserve your seats today.

How you can help

You can have a direct and significant influence on these candidates and their parents as they see the lasting influence and fraternity that attendance at USNA affords.  Your financial help is critical as the entire cost of this event – estimated to be $15,000 – is borne by our local chapter.  These costs include transportation and accommodations for the Superintendent and dinners for our invited guests: candidates, their parents, and USNA participants and representatives.  The dinner ticket cost this year will be $50, the same as last year.

You can help by being a financial sponsor of this event:

Please note that the Blue Chip Dinner is intended to let Candidates specifically designated by the Admissions office meet Alumni, current Midshipmen, and parents from the Naval Academy family.  As such, seating priority will be given to those groups. We expect to reach our capacity for this event. We may not have capacity for non-official candidates or other interested parties. Seating for this event is subject to such constraints, and we reserve the right to turn away, with refund, those who cannot be accomodated due to this constraint.

Reservations need to be made as soon as possible due to limited seating, but not later than Saturday, December 17, 2021.  A wait list will be utilized for any over-subscription.

Vice Adm. Sean Buck became the 63rd superintendent of the U.S. Naval Academy July 26, 2019. A native of Indianapolis, he graduated and received his commission from the U.S. Naval Academy in 1983 and was designated a naval flight officer in 1985. He earned a Master of Arts in International Security Policy from George Washington University and has completed studies at the College of Naval Command and Staff, U.S. Naval War College, and the Armed Forces Staff College; a fellowship with the Massachusetts Institute of Technology’s Seminar XXI: Foreign Politics, International Relations, and the National Interest; and executive certificate programs at both the Harvard Kennedy School and Harvard Graduate School of Education.

Flying the P-3C Orion, Buck’s early at-sea operational tours were with the “Fighting Marlins” of Patrol Squadron (VP) 40; a disassociated sea tour aboard USS Theodore Roosevelt (CVN 71) as the catapult and arresting gear (V-2) division officer; and a department head tour with the “Tridents” of VP-26. He subsequently commanded VP-26 and Patrol and Reconnaissance Wing 11.

His shore and staff assignments include Air Test and Evaluation Squadron (VX) 1; the Bureau of Naval Personnel; the Joint Staff J3; Office of the Chief of Naval Operations (OPNAV) staff as executive assistant to the deputy chief of Naval Operations (CNO) for Warfare Requirements and Programs (N6/N7); and as the deputy director for operations in the Strategy and Policy Directorate (J5), U.S. Joint Forces Command. Prior to major command, Buck completed an interim assignment with the National Reconnaissance Office (NRO); he is a member of the Navy’s Space Cadre. He also completed a special assignment as a senior fellow on the CNO’s Strategic Studies Group (SSG) in Newport, Rhode Island, an innovation think tank for the Navy.

Buck’s personal awards include the Distinguished Service Medal, the Defense Superior Service Medal (two awards), the Legion of Merit (five awards) and various other personal, unit and service awards. He is most proud of his various unit awards that reflect credit on the successful teams he has served with and the many skilled professionals he has been privileged to work alongside.