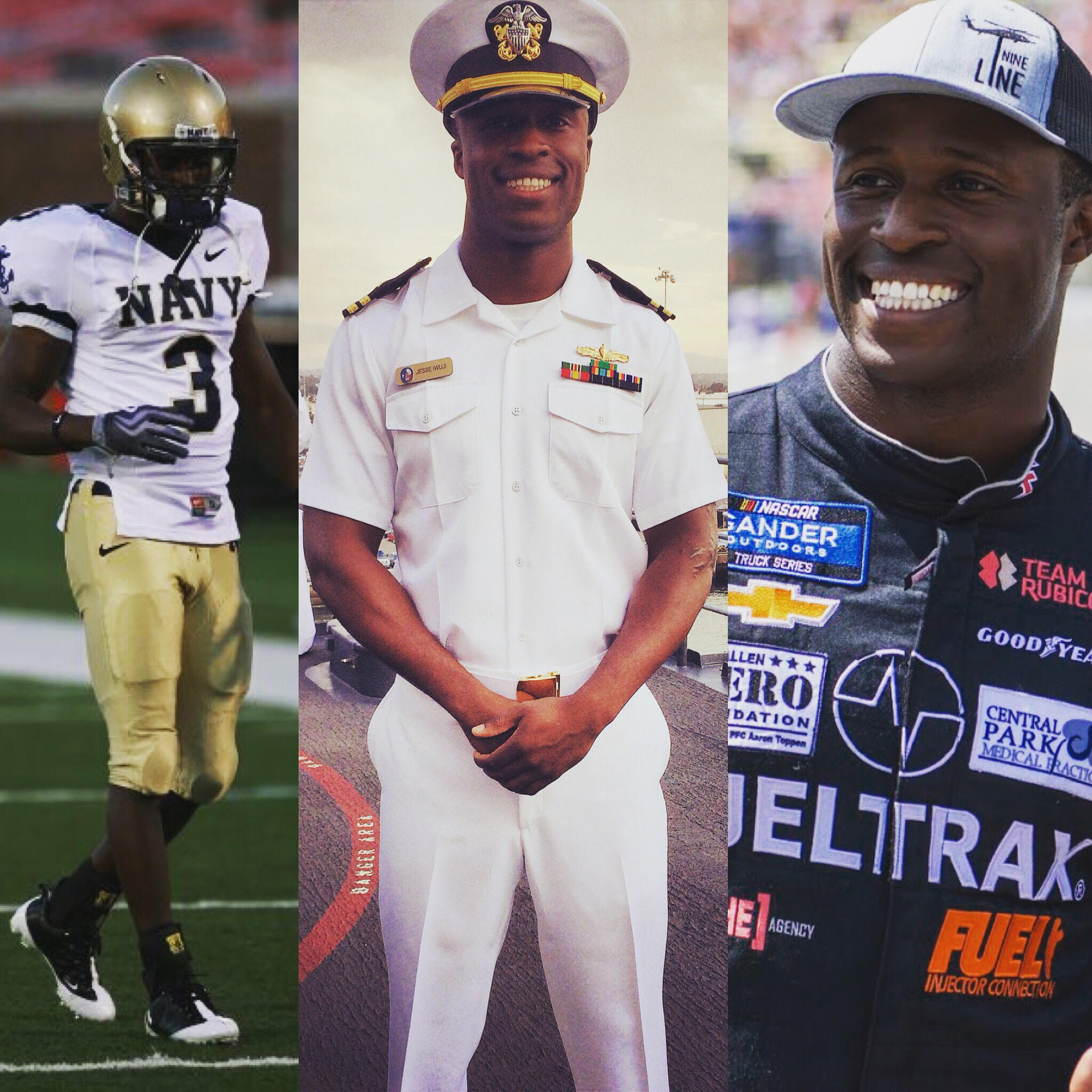 Please check back as we look to reschedule this event!

As part of our ongoing series to bring exceptional speakers for our monthly Chapter Luncheons, we are excited to bring you Dallas’s own Jesse Iwuji. After joining the Naval Academy and playing football all all four years, Jesse went on to have a successful career as a Surface Warfare Officer where he still serves in the active Naval Reserve. Equally exciting, he’s now a professional racecar driver, currently competing in the NASCAR truck series while running his own business! This is sure to be a lunch you won’t want to miss and a true testament to the talent and capability of Naval Academy alumni in service and after!

At a young age, Dallas, TX native and Nigerian-American, Jesse Iwuji was interested and driven in the sporting world. Being a Texan, football naturally took its course in his life and landed him a full ride scholarship to one of the nation's top universities, the US Naval Academy. There he played NCAA Division 1-A College football four years, graduated with a Bachelors of Science, and was commissioned as a Surface Warfare Officer in the US Navy. He is still currently an officer and he has been on two Arabian Gulf deployments totaling out to 15 months of deployment time on two different Naval Warships. Outside of the Navy, Jesse has always had a passion in Motorsports. In 2015 Jesse made history by becoming the first US Naval Officer and Naval Academy graduate to compete in NASCAR. 2015 was Jesse's first official stockcar racing season and he began it in the NASCAR Whelen All-American Series at Irwindale Speedway. From late model stockcars he transitioned toward the end of 2015 into the NASCAR K&N Pro Series West and competed in the 2016 season with Patriot Motorsports Group where he finished Top 10 in the overall points standing as a Rookie. Upon season ending he won the 2016 NASCAR Diverse Driver Award given to a driver in NASCAR's top developmental series who has done most for diversity in the sport. With more competition and competitors in the series in 2017, Jesse competed in the full NASCAR K&N Pro Series West season with Patriot Motorsports Group and finished Top 15 in points for his sophomore season in his NASCAR career. In May of 2017 Jesse transitioned from active duty service to the Naval reserves. At the end of the 2017 Jesse became a 2-time winner of the NASCAR Diverse Driver award. 2018 marked the beginning of Jesse’s move to larger tracks where he could get NASCAR Cup Series type track experience when he began racing the 1.5-2.66 mile Speedways & Super Speedways in the ARCA Series. Jesse finished 13th in points in the NASCAR K&N Pro Series West for 2018. In Aug 26th 2018 Jesse made history again by being the first current serving member of the US Navy to debut in the NASCAR Camping World Truck Series where he had a Top 25 finish and moving into 2019 had multiple Top 20 finishes even on a smaller underfunded team competing against much higher budget teams. Outside of racing & the Navy, Jesse has also starred in various TV & Online shows distributed nationally, owns his own drag racing events company called The Red List Group, and owns a newly started trucking company called JBJE Transportation.

Please purchase your tickets through the link near the event description.

Ismael Ortiz
Clifton Colbert
Benjamin Michael
Stephen Shigley
Sarah Shigley
... a total of 5 guests.
Note: to opt out from this list please sign in, go to My Account and change your preferences under My RSVPs.