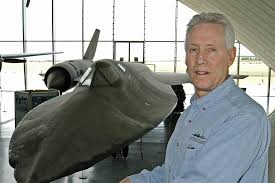 As part of our ongoing series to bring exceptional speakers for our monthly Chapter Luncheons, we are excited to bring you Rich Graham, retired USAF Colonel, SR-71 Pilot, and author.    Rich is the author of SR-71 Revealed: The Inside Story, and several other books on his experiences as a SR-71 pilot.  After retiring from the Air Force, Rich continues to teach  and speak on aviation.  This is a lunch not to be missed as Rich shares his experiences during one of the most exciting times in aviation history.

We will also host our annual football predictions are we prepare for another season of Navy football!

Colonel (ret) Richard Graham graduated from the University of Akron, Akron, Ohio in 1964. He received a master's degree in Sociology in 1977 and in Public Administration in 1979 from Pepperdine University, Los Angeles, California.

Colonel Graham entered Air Force pilot training, receiving his wings in 1965 at Craig AFB, Selma, Alabama. He remained at Craig as a T-37 Instructor Pilot and Flight Examiner until 1970. Upon completion of F-4 fighter training, he flew 210 combat missions over North Vietnam and Laos from 1971-1973.  He was selected to enter the SR-71 strategic reconnaissance program in 1974 at Beale AFB, California. He flew the SR-71 for the next seven years, amassing 756 hours in the worlds fastest and highest flying aircraft. In 1980, he was selected to be the squadron commander of the SR-71 unit at Beale, where he served until his assignment to the Air War College at Maxwell AFB, Montgomery, Alabama.  In 1986, Colonel Graham was the Vice Wing Commander at Beale AFB. In June of 1987 he was selected to be the 9th Wing Commander. During that time he was privileged to be able to fly the SR-71, U-2, T-38 and KC-135Q concurrently, for over two years. During his 25 years of service, he amassed 4,600 hours, retiring from the Air Force in 1989. His military decorations include three Legion of Merit awards, four Distinguished Flying Cross medals and 19 Air Medals.

Upon retirement from the Air Force, he joined American Airlines in Dallas, Texas. After flying 13 years at American, he retired in August 2002 as a Captain on the MD-80 aircraft, with over 7,500 hours. He now spends his time as an author, speaker, aviation consultant, and flight instructor. Col. Graham is currently a mission and check pilot with the Civil Air Patrol squadron in Dallas.

He has written two books, "SR-71 Revealed, The Inside Story," and "SR-71 Blackbird: Stories, Tales, and Legends." A veteran of 15 years of assignments within the SR-71 community, he is uniquely qualified to tell the SR-71 story.

Please purchase your tickets through the link near the event description.